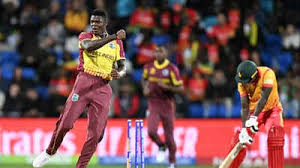 News Desk: It was a remarkable comeback performance by the former two-time world champion Windies. On Wednesday, it trounced Zimbabwe by 31 runs in its Group B clash of the ICC T20 World Cup 2022 at the Bellerive Oval in Hobart. With this success, the Caribbeans remain in contention for the Super 12 stage, losing their opening encounter to Scotland on Monday. Meanwhile, the Chevrons, too, stay on course for the next round, as this happens to be their opening loss. Both sides still have a game at the same venue on Friday.

Winning the toss, Windies skipper Nicolas Pooran opted to bat, as it lost Kyle Mayers (13) in the fourth over of the Powerplay (PP), with 28 runs on the board. Then, fellow opener Johnson Charles (45) and Evin Lewis (15) added 49 for the second wicket before the latter fell in the tenth.

Suddenly, the Caribbeans lost a flurry of wickets regularly and went down to 101/6 by the 14th. Nonetheless, Rovman Powell (28) and Akeal Hosein (23) put on a 49-run partnership before the former was dismissed in the final over, as the Windies posted a par total of 153/7.

For the Zimbabweans, off-spinner Sikandar Raza claimed three and was also the most economical. In reply, Zimbabwe looked promising with its start but lost three for 48 by the sixth over of the PP. They lacked enough promising partnerships and were bundled out for 122 by the 19th, with Luke Jongwe (29) being the top scorer. At the same time, pacer Alzarri Joseph bagged four for the Windies, and fellow pacer Jason Holder was economical with three scalps. RCB back on winning track again