News Desk: The Board of Control for Cricket in India (BCCI) on Sunday, September 18 unveiled the new kit for T20I cricket. Rohit Sharma and Harmanpreet Kaur’s teams will return to ocean blue shade of the iconic blue kit. The new kit unveiled on Sunday reminded fans of the light blue shade that was prevalent under Sourav Ganguly and the early half of MS Dhoni’s captaincy tenures.

India’s new T20I jersey has dark blue shade on the shoulder and the sleeve and it also spills into the left torso area. The jersey is styled by patterns made of equilateral triangles, which according to manufactures MPL Sports, is a ‘\blend of spirit and power – that celebrates the unswerving support of the fans’.

India cricketers, including captain Rohit Sharma and former captain Virat Kohli, had a photoshoot with the new ocean blue jersey ahead of the 3-match T20I series against Australia, starting September 20.

Several India cricketers, including Rishabh Pant and Yuzvendra Chahal, posed with the new kit and rated their new threads. 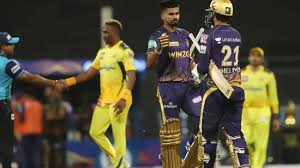 IPL 2022: KKR won the opening match against CSK by 6 wickets