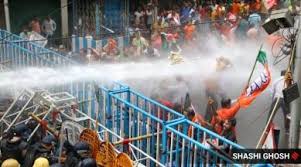 Debjit Mukherjee, Kolkata: After the violence in BJP’s Nabanna Abhiyan, BJP National president JP Nadda constituted a five-member committee that would visit the state and would collect facts from the site and submit it to him.

The BJP national president also asked the state government to establish strong law and order and punish those who had beaten the BJP workers.

Meanwhile, to protest against the alleged atrocities of police during BJP’s Nabanna Abhiyan on September 13, the saffron camp on Friday took out a rally in Kolkata to gherao the police headquarters in Lalbazar.

Soon after the rally started in the College street area in central Kolkata, the rally was stopped by police.

The BJP workers were also seen carrying toy guns as well as pens to protest the comment of TMC national secretary Abhishek Banerjee.

BJP youth wing president Indranil Khan said,” We are carrying pens as it is mightier. We don’t believe in violence.”

It may be noted that ACP Debjit Chatterjee had fractured his hand during the saffron camp’s rally. After meeting Chatterjee in the hospital, TMC national secretary said that he salutes the police for the manner in which they had managed the rally.

“The BJP workers were seen pelting stones at police and despite having the chance to shoot they managed everything peacefully. I salute them. But had I been there I would have shot on the head,” Banerjee was heard saying.

In order to protest against this statement, the BJP workers on Friday were seen carrying toy guns.

The BJP workers were also seen gherayoing police stations across the state. 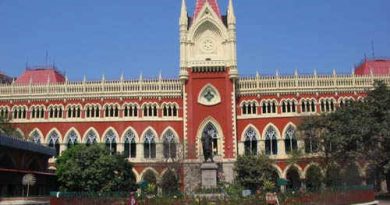 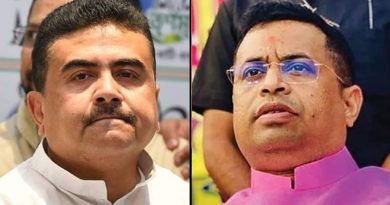 “The leader of the opposition of assembly from our party is misleading the party’s central leadership. This cannot be accepted” : BJP MP Saumitra Khan on LoP Suvendu Adhikari 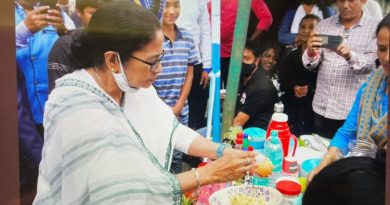