News Desk: In a shocking incident, a 25-year-old Dalit woman was gang-raped by two men in Pinhat area of Agra district of Uttar Pradesh.

The incident took place when the woman was returning home after meeting her parents in Mansukhpura area on Monday. Police have now filed an FIR in the case after a complaint by the victim’s husband.

According to the police complaint, the woman’s husband said he, his wife and two children were coming back home when she stopped in the market for some work. He later went home with the kids.

The complaint further stated that the woman was on her way home when ex-village Abhishek Tyagi and the husband of the current pradhan offered her a lift in their car.

The woman’s husband alleged that Abhishek and his friend Vinod Tyagi sexually assaulted his wife while three other men were present in the car.

The accused then abandoned the woman in an unconscious state and fled the spot. The woman then informed her husband and filed a case on Tuesday.

An FIR under sections 354  criminal use of force intending to outrage modesty of woman) 375D (gang rape), 504 (Intentional insult with intent to provoke breach of the peace), 120B (criminal conspiracy) of IPC and relevant other sections of SC/SCT Act has been filed against five persons.

Police said a probe has been initiated into the incident and the victim was sent for medical examination. Why ‘Betis’ are not safe in Yogi’s ‘Ram Rajya’? 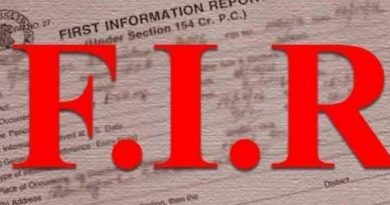