News Desk: The Central Bureau of Investigation (CBI) on Thursday raided three residences of businessman and youth Trinamool Congress (TMC) leader Vinay Mishra and businessmen Amit Singh and Niraj Singh, who are siblings, in connection with the ongoing investigation into the coal smuggling case.

None of the suspects were home during the raids. Notices were served, asking Mishra and the others to appear for questioning at the CBI office in Kolkata on January 4.

It is alleged that illegally mined coal, worth several thousand crores of rupees, have been sold in the black market over several years by a racket operating in the western parts of West Bengal where the Eastern Coalfields Limited operates several mines.

In early December, the CBI also raided the home and office of Ganesh Bagaria, a Kolkata-based chartered accountant.

Ever since the probe started in September, the Bharatiya Janata Party (BJP) has been alleging that the money from the sales was whitewashed through shell companies and siphoned into the funds of the ruling party. The BJP has also alleged that the main beneficiary is Abhishek Banerjee, Lok Sabha member and nephew of chief minister Mamata Banerjee.

Abhishek Banerjee is also the president of the TMC’s youth wing. On July 20, he appointed 15 general secretaries, including Mishra.

Accompanied by Central police force personnel, the CBI teams on Thursday simultaneously raided three apartments Mishra owns at Chetla and Rashbehari in south Kolkata and Lake Town in east Kolkata. Mishra’s south Kolkata residences are located not far from the homes of Mamata and Abhishek Banerjee.

CBI officials refused to comment on the outcome of the raids and progress in the probe. An official said on condition of anonymity that several laptops, which were password protected, and documents were seized from Mishra’s residences.

Anup Majhi alias Lala, the prime suspect in this case, is absconding and a lookout notice has already been issued by the probe agency. In November, the CBI raided 36 offices allegedly run by Majhi and also conducted a probe at the ECL headquarters in Asansol.

The CBI teams on Thursday also raided the residences of Amit Singh and Niraj Singh at Konnagar in Hooghly district. Mishra and the Singh siblings are also under a cloud over allegations of their possible involvement in the smuggling of cows to Bangladesh that the CBI is probing since 2018. Two Border Security Force (BSF) commandants have so far been arrested in this case and several more are under scanner alongside officials in the state police and the Customs.

The BJP leadership took jabs at the TMC after Thursday’s raids.

“This is the true picture of the team members under the “able” leadership of the Nephew. What a great team he has made to take the @AITCofficial to a “different” level. #TolabaazBhaipoHatao!” tweeted Suvendu Adhikari, the former transport minister who joined the BJP on December 19. 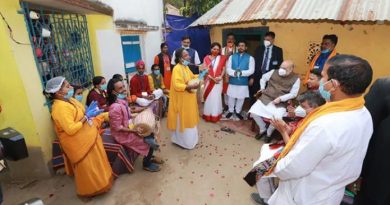 “Neither did any BJP leader get in touch with me after Amit Shah Ji left”: Baul singer Basudeb Das “24 MLAs are in touch with me to work under Mamata Banerjee’s leadership”: Mukul Roy