News Desk: As Trinamool Congress supremo Mamata Banerjee on Wednesday took her oath for the third consecutive term as the chief minister of West Bengal; elsewhere in Kolkata, the Bharatiya Janata Party (BJP) also took another — to ‘dismantle” political violence in the state. BJP national president JP Nadda, addressing his party workers in the city, said, “We take an oath to carry out our responsibility, by happily accepting the mandate, and play the important role of Opposition. What we fought in Bengal – political violence, appeasement, and tyranny – we won’t step back from carrying out our duties.”

Post-poll violence across West Bengal has ensued over the past two days, with reports emerging of clashes between rival political workers, torched party offices, and the deaths of workers and supporters cutting across party lines.

The BJP has been protesting the rampant violence in the state, alleging that the TMC is hunting down its members in retribution. The party is also holding a nationwide dharna today to protest what it calls the debilitating law and order situation in the state and has demanded that President’s Rule be will imposed. At the same time, however, the BJP is also maintaining a line of political courtesy with the Trinamool, as Prime Minister Narendra Modi on Wednesday took to congratulate Mamata Banerjee on her swearing-in.

Addressing BJP workers, JP Nadda said, “Those who were supposed to protect others are the ones responsible for this violence. They can take oath, everyone has the right to do so in a democracy. But we also take an oath that we’ll dismantle political violence in Bengal.”

“Do you want a Bengali girl to bow down to Delhi, or do you want to snatch the rights of Bengal from Delhi with a broken leg?”: TMC MP Abhishek Banerjee 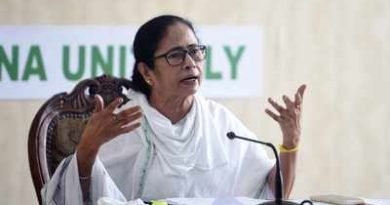 “I am ready to provide job and financial support to the family”: Chief Minister Mamata Banerjee